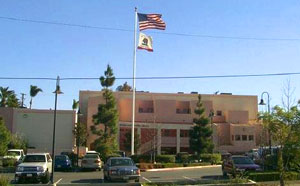 Demolition of Yorba Linda’s public library – located for 60 years near the Imperial Highway and Lemon Drive intersection – is scheduled to be completed in December, with the contractor required to provide a construction-ready site for an In-N-Out Burger restaurant.

Cost is estimated at $374,000, or $430,000 with a standard 15% contingency. Anaheim-based AMPCO Contracting won the contract after submitting the lowest of seven bids. The firm previously completed the $4.2 million site demolition for the 80-acre Anaheim Concourse.

The project will have minor traffic impacts to the surrounding area during demolition, Assistant City Engineer Rick Yee said in an Oct. 6 report. “Impacts are due to the temporary lane closures during the required time frame to access utility services in the street.”

Work is to be scheduled so there will be no lane closures before 8:30 a.m. or after 3:30 p.m., especially on busy Imperial Highway, which will have all traffic lanes open during non-working hours. Demolition is scheduled to be completed in 35 working days.

Interestingly, the city’s $610,000 project estimate was higher than five of the bids, which ranged to a high of $702,000. The city’s estimate presumed the presence of hazardous materials that would have required a higher cost for treatment and disposal.

A final parcel map for the 1.5-acre, 18181 Imperial Highway location was approved by City Council members at a recent meeting. The map consolidates the site’s 21 lots into a single lot to accommodate the future sale of the property to In-N-Out Burger.

A purchase agreement between the city and In-N-Out “is currently in place, with escrow set to close at the end of the year,”Yee said in a September report to the council. The city sold the land in 2018 to In-N-Out for some $3.5 million to help pay for a new two-story, 45,000-square-foot library on Lakeview Avenue.

The near-4,000-square-foot restaurant will have a 29-car capacity drive-thru lane, with a camera system to alert managers to potential parking lot problems. Plans also call for 70 seats each for indoor and outside dining.

A final $3.7 million remodel was completed in 1992. The first library opened in 1913 in the Yorba Linda School District building on School Street and moved to a Valencia Street and Lemon Drive location in 1917, then to an Olinda Street building in the 1920s.

The Yorba Linda Library District was formed in 1914, with trustees elected by district voters until 1985, when the trustees approved a merger with the city. Library income is still derived from the property tax revenue established under the old library district.

Jim Drummond is a longtime Yorba Linda resident. He gives his opinion on local issues weekly. Send e-mail to jimdrummond@hotmail.com.

AMPCO efforts resulted in a cohesive controlled demolition site, a detailed SWPP’s and a public complaint free project. The scope of work was completed ahead of schedule at cost savings to the City.